Murder in the Safe Zone

During a meeting between guilds and players on March 6, 2024 on the 56th floor, Asuna, who has now become Vice Commander of the Knights of Blood Oath guild, propose a plan to lure a boss they are fighting into a village but is opposed by Kirito, as the NPC villagers will be killed. A month later on the 59th floor, Kirito is taking a nap until Asuna arrives, criticizing him for being lazy but he convinces her to relax as well. To thank him for guarding her while she was asleep, Asuna decided to buy lunch for him at a town on the 57th floor. However, they discovered a player killed, hanging outside the church, impaled with a spear. As they both investigate, Kirito wonders how the player was killed in a safezone unless he was dueled by another player or someone has found an exploit to kill players. Yoruko, a girl who was a friend of the victim, Kains, saw someone behind Kains before he was hanged. Asuna and Kirito heads towards Egil’s shop to help them find clues on the murder weapon, which Egil learns it’s a custom made weapon by a player named Grimrock. Explaining what they discovered to Yoruko, she reveals how she and Kains are related to Grimrock. Six months ago, she, Kains and Grimrock were part of a eight-man guild called the Golden Apple lead by Griselda, Grimrock’s ingame wife. One day the guild acquired a rare ring and voted whether to use it or sell it, with three members, Yoruko, Kains and Schmit, now a member of the Holy Dragon Alliance, voting to use it. Griselda went out to sell the ring but was killed. Yoruko believes the killer is targeting the three of them as he suspect they were involved in Griselda’s death. After getting Schmit and explaining to him everything, Yoruko becomes paranoid, believing Griselda’s ghost wants revenge against them. But Yoruko is killed after someone throws a dagger from outside. 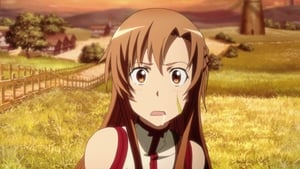 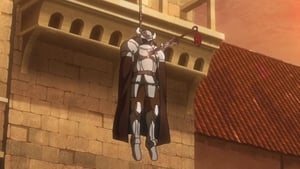