Jane wants a maid but George says they can’t afford it. He invites Mr. Spacely over for dinner but what he doesn’t know is that Jane has taken a free one day trial offer on a slightly used ‘Rosey’. George is in a panic because he thinks that he can’t possibly convince Mr. Spacely that he needs the raise if he sees Rosey. In a pinch, Rosey takes leftovers and whips up a delicious dinner and a Pineapple Upside Down Cake. Spacely fires Jetson and storms out the door. He calls a little later, munching the cake and says that anybody that can make such a delicious cake can’t be all bad. In the meantime, Rosey has left, thinking that she caused the family trouble, but they find her at the bus stop and take her home for good …. 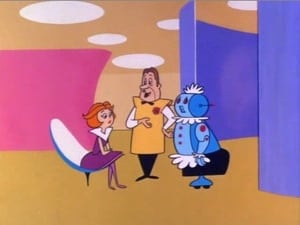