A medical test shows that George is more suited to be president of the company than Spacely himself. That is: after Elroy finds out Spacely distracted George during the test on purpose so he could pay him less salary. Elroy forces the score and George is executive for 2 weeks. Will George behave or will power raise to his head? Mr. Cogswell tries to put Spacely out of business when George is in charge for two weeks. 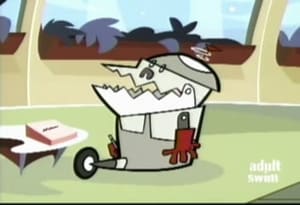